“Teachers are for education, not for deportation!” 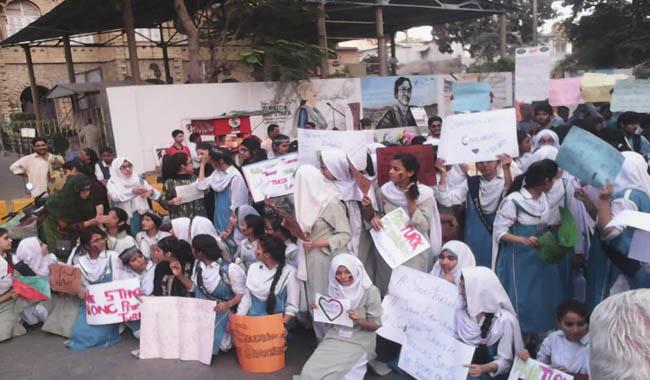 KARACHI: “Turkish teachers have been serving Pakistan for the past two decades at a time when the literacy rate in the country has been disappointing,” said Daniyal Soomro, a student of PakTurk College.

He along with a large group of students had gathered outside KPC on Thursday protesting against the deportation of the staff of PakTurk schools, following the Interior Ministry’s November 20 deadline. This was given days before Turkish President Recep Tayyip Erdoğan 2-day visit to Pakistan.

The students were holding placards that revealed the emotional turmoil these students were experiencing faced by an uncertain future. Their main message was simple yet powerful: “Teachers are for education, not for deportation!”

In July, the Turkish Ambassador to Pakistan Sadik Babur Girgin had - after the failed coup in Turkey - called upon all friendly countries to bar Fethullah Gulen-linked institutions from working.

Pakistan complied with this request, giving PakTurk educational institutions a week to wrap up their business to the distress of the students.

Hasan Rizwan, another student, told The News that teachers affiliated with PakTurk schools and colleges were not involved in any activity against any country, adding that they were in Pakistan only to teach Pakistani students.

“The fate of more than 11,000 students studying in PakTurk Schools and Colleges across Pakistan is at stake. They are the one who will bear the brunt of Pakistan’s decision to deport Turkish staffers,” said a Pakistani teacher who worked at one of these schools.

She expressed concern for the safety of her Turkish colleagues, voicing fears that they might face the same fate as those who were accused of having links with Gulen.

A disclaimer on the official website of PakTurk Schools and Colleges stated: “We are deeply concerned by allegations made by a certain section in the social media trying to connect the PakTurk International Schools and Colleges in Pakistan with Mr. Fethullah Gülen or the political movement ascribed to him in wake of the recent unfortunate and reprehensible events in Turkey.”

It further clarified that “PakTurk International Schools and Colleges in Pakistan have no affiliation or connection with any political individual or any movement or organization, whether political, religious or denominational, nor do we have a financial relationship with any movement.”

Maliha, another Pakistani teacher of the PakTurk School’s Gulshan branch, that over the years a strong relationship had developed between the Turk teachers and their Pakistani students.

“They have been serving Pakistan for the last 21 years and now suddenly they have been asked to leave Pakistan along with their families.” she said, calling it a grave injustice.

She said the PakTurk Schools have no connection with Fethullah Gulen and most of the students don’t even know his name.

However, a first year student Rafia did know who Gulen was and she added that many of her friends also knew him. ‘Yes, we know who Gulen is; we read about him as he is an Islamic scholar but we have never been taught about his political vision and activities.”

Every parent wants the best education for their child and will do anything to achieve this. “Look at the state of education in Pakistan and think about the future of Pakistani children.” said Farhat Shahab, a mother of one of protesting students.

She said Turkish teachers are the reason why we send our children to PakTurk Schools and without them these schools will no longer remain PakTurk Schools.

CNG supply across Sindh to be restored on Saturday