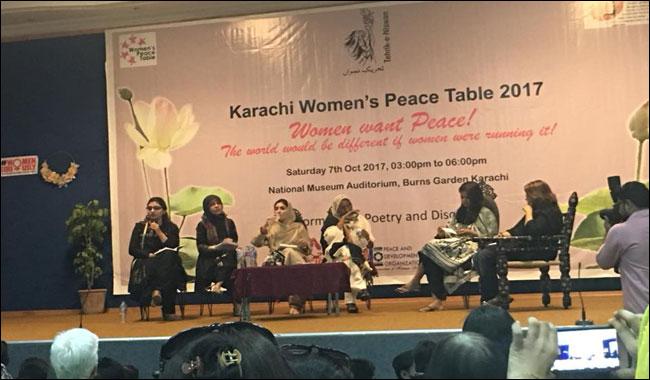 The third Karachi Women's Peace Table 2017 event took place in the National Museum, here Saturday. A perfect amalgamation of poetry, theoretical performance and a panel discussion seminar was jam-packed with attendees from all walks of life.

“Women’s rights are human rights, but the struggle to find a voice never stops. Thank u @sheemakirmani for bringing us together. #PeaceTable pic.twitter.com/WSDSIbi5xv

Seminar beautifully conveyed social issues in Pakistan through theoretical performances and gave strong, moving lessons to the audience. Whether it was the brutal murder of Mashal Khan or untold stories of the missing persons, a tribute was given to all the lost souls of the country.

Rights of women remained in focus specially regarding female status in different provinces of Pakistan. Persecution against women, misogyny prevailing in the society and lack of female representation in assemblies and decision making institutions remained a major highlight.

The panel discussion had representative Noureen from Balochistan, Gulalai Ismail from KPK and Sheema Kirmani.

According to women's rights activist from Balochistan Noureen just 28 percent of the women can give safe birth under proper medicated conditions in Balochistan.

Highlighting issues of minority, Sheema Kirmani said, “Despite living here since forever we are still associated with neighbouring country.”  She continued, “How many of the women from lower minority class made it to assemblies? What have our female parliamentarians done for lower class women?”

A participant from the panel discussion also questioned, “Why had there been a silence over the missing of a female journalist Zeenat Shahzadi?

Women activist from KPK Gulalai Ismail said people in KPK aren’t born with hate, misogyny and violence but they are misconstrued and misguided through various means.

Students from class 9 to 12 return to schools