Plight of journalists around the world 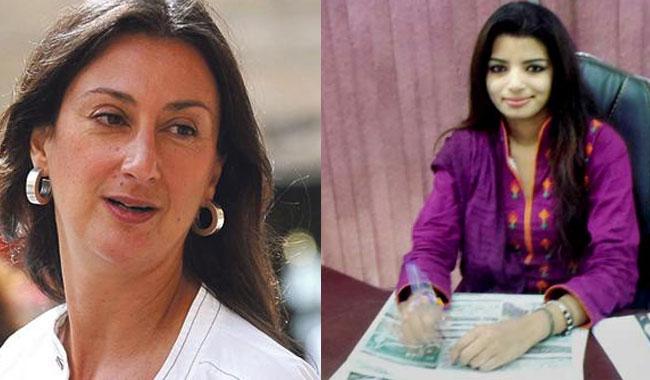 Missing of female Pakistani journalist Zeenat Shehzadi who returned home safely after more than two years and killing of female reporter Daphne Caruana Galizia in Malta, in car explosion show plight of journalists around the world.

Reporters, correspondents, columnists over the world have been quite vulnerable to attacks in the recent time. Over 2,297 journalists have been reported killed since 1992.

These attacks on media persons come in various forms; from dying in conflicted zones to getting harassed, kidnapped, intimidated, unlawfully arrested and assassinated in the non conflict areas, they are committed by different sections of the society.

Criminal elements, terrorist outfits and non-state actors are involved in the disappearance and even brutal killing of journalists.  If not murdered or abducted, they face restrictions and threats from them.

Iraq, Syria, Philippines, Somalia, Algeria, Pakistan, Russia, Colombia, Mexico and India are some of the most dangerous places for journalists to perform their duties.

Since 1990, the Asia Pacific region registered the highest death toll at 571, followed by the Middle East with 473 killings, the Americas at 472, Africa at 424, and Europe with 357 dead, according to a report.

Disappearance of journalists, attacks and violence against them is also not an unusual thing in Pakistan.

Today, it is reported that a female journalist, Zeenat Shehzadi, who went missing in 2015 has returned home safely.

She was reportedly abducted by non-state actors and enemy agencies in Lahore in 2015. She was working for a private TV in the provincial capital.

Commenting on the return of Zeenat, senior journalist and ex president Karachi Press Club Nizamuddin Siddiqui said, "Journalists have always faced difficulties; however they can express their opinions more easily now compared to 20 years back in previous governments."

Former president KPC Fazil Jamili said, "Zeenat's release has given hope to the families of all missing persons."

Another major example is of Hamid Mir, a renowned senior journalist, who was attacked in 2014. Gunmen on motorcycles attacked his car and injured him.

Umar Cheema, investigative journalist at The News was picked by unknown men and tortured.

In 2011, reporter Wali Khan Babar was gunned down in Karachi.

Recently, just in 2017, a cameraman of a private TV channel Taimoor Khan and Haripur bureau chief for a newspaper was also murdered.

Recent addition to the list of deaths from international world is of a journalist Daphne Caruana Galizia in Malta, who was killed in car explosion. Her death has raised many questions in Europe regarding freedom of expression and transparency.

Called “one-woman WikiLeaks” for being a hardliner in the way of underworld figures and country’s establishment, she remained relentless in exposing corruption and investigating Panama Papers.

Gauri Lankesh was a prominent Indian journalist fatally shot outside her house on September 5. Few weeks later, another television personality Santanu Bhomwik was abducted and dead.

Students from class 9 to 12 return to schools